Off to my trail!

Woke up early this morning to climb up Mt. Sto. Tomas in Tuba, Benguet which wikipedia describes it’s topography is “generally characterized by irregular rugged terrain and steep slopes. It is a plateau with several mountain peaks rising from the table land itself. Mount Santo Tomas, the highest peak in the area soars to 2,252 meters above sea level.” It was a gruesome ordeal for me for the temperature was so cold and the air is so crisp that it was so hard to breath. 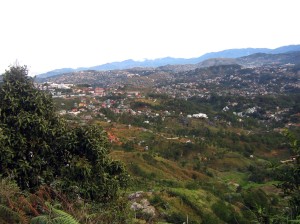 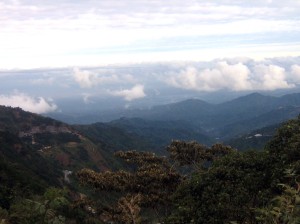 Pat and RG on the go

It was a run/walk trail for me, the road was rugged and steep. Considering that this is my first trail run it was so hard for me. I did this as a part of my training for the upcoming event this January 18 on Nasugbu, Batangas. I’m having jitters eversince my esposo registered me for the 10K event in The North Face “Thrill of the Trail”. I’m not quite sure if I’m ready for that event that’s why I’m doing everything I can in my power to ready myself. I’m setting my goal of less than 1hour 30minutes for me to finish the race.

My energetic esposo (he was able to climb the 4K rugged and steep slope in 34mins.)

just in front of the radar

My esposo, being a native from Baguio City educated me that the road we travelled earlier was called “fire road” which means “a gap in vegetation or other combustible material that acts as a barrier to slow or stop the progress of a wildfire. I was careful enough while running because you’ll never know when you’ll trip on a rock and stumble. I have to stay injury-free for my future runs. During the course of the run, my face and my hands felt numb because of the chilling wind. I have to stop once in a while to gasp for some air. My head even hurt because of the cold temperature.

Overall the run was priceless for me, it’s my first trail run in Baguio City. I was with my esposo, sister and brother in law. And it is rewarding for me to know that I have accomplished this, being able to run/walk to the highest peak in Benguet. I’ve given myself a pat in the back and it certainly boost my running attitude.