A day to remember at Shotgun Trail

Yesterday was run at the UP Oval again.

It was 3PM when my esposo and I left the house to go to Timberland. As he promised we would run on trail so that I would be conditioned for the event on Sunday. It was a good thing that there was no traffic so we reach the place in less than an hour. We took the route from Commonwealth, Batasan, Montalband. It was a fine day for a run.

We parked beside Aling Tina’s store but it was not open. My esposo said that it usually opens during weekday where there a lot of bikers and runner going to Timberland. We run on the road which is approximately 1.8K. I thought that we would be running in Timberland Heights only to know that we would be running what most of the bikers call the “Shotgun Trail”. I was literally panting and crying for help and I thought that I would die ( 😉 drama). My knees were so weak to go further but I had to push trough. It’s my training, remember. 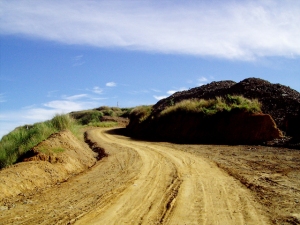 This photo was courtesy of ratbugasmati69 of motorcyclephilippines.com, I forgot to bring my camera and my cellphone’s image quality is not that good.

And my favorite part of the run was going downhill. But of course I had to be very careful cause I might slip and injure myself.  My feet had to act as a brake for I  might roll down (hahahaha). Because of that I had blisters on both of my feet.

I felt good after the 12K run and I think that I’m ready for the TNF Challenge. We finish the run in 1hour 30+ minutes. For tomorrow, we will be running in The Fort, I’m planning on running 10K. This week is really a run-full week. Yehey!

My esposo just had a bike ride there last Saturday together with his group and he also had a hard time pedalling while going up the mountain, here are some of their picture from their ride.

Biker having a hard time climbing

My very energetic esposo and on always on the go

View from the top

Maybe you should try it sometime. 🙂